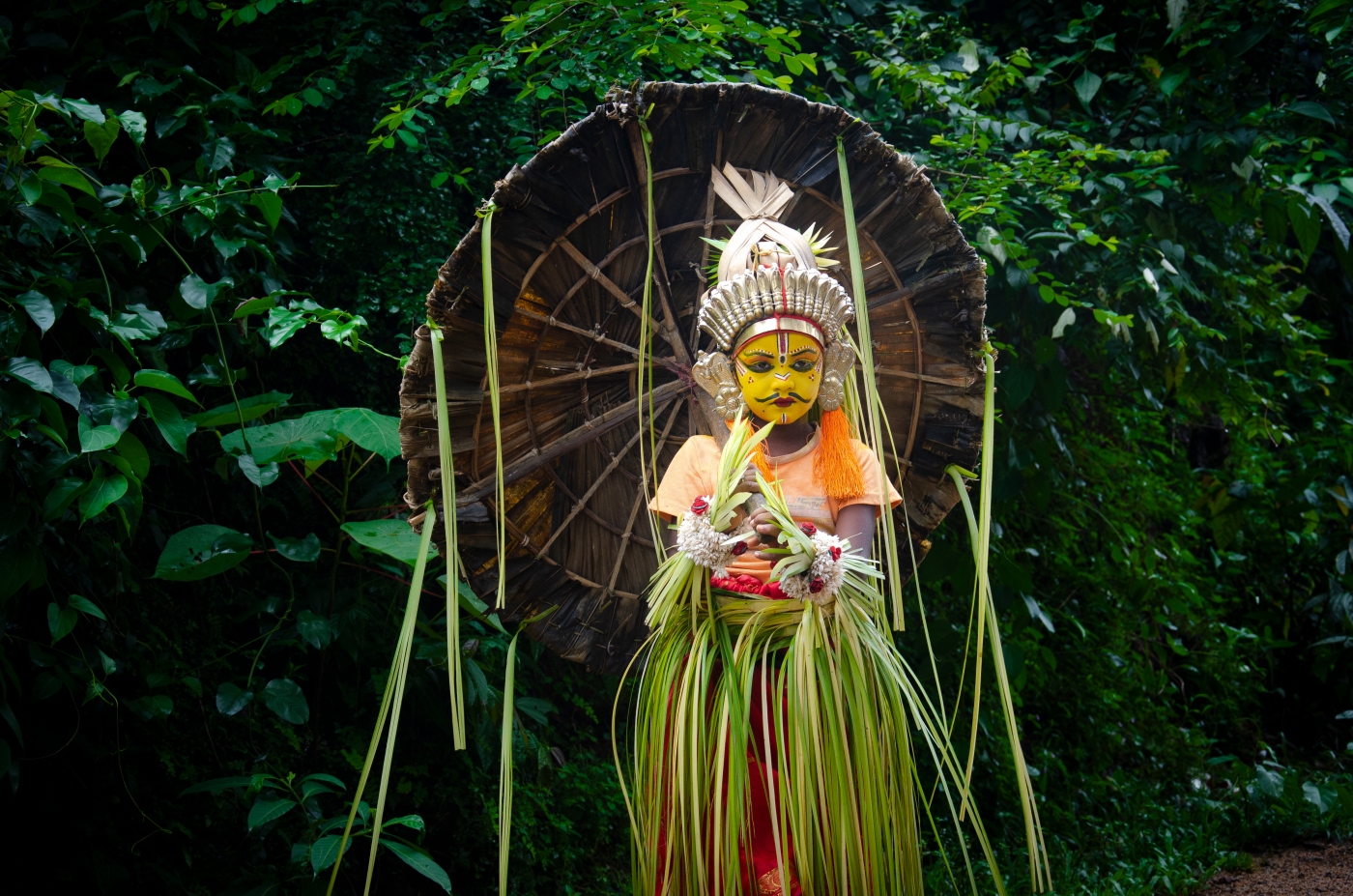 (This article by yours truly has been published in Deccan Herald Spectrum on 18th August 2022. Photos taken by Shashikanth Shetty. Screenshot of published article below, gallery of photos at the end of the article.)

Traditions of Tulunadu are seasonal and very connected to the demography of the coastal region. The fundamental idea behind all the traditions of Tulunadu is utility value and facilitation of everyday life; but Tuluvas have managed to add an aesthetic and cultural value to their simple practices. Some rituals like Mankaali and Sonada Jogi which started off as practices to support the lifestyle of certain modest communities are slowly fading away because they no more hold the utility value; but can still be found in some regions just because the community wants to conserve the tradition. Aati Kalenja is one such practice.

The season of ‘Aati’ usually ranges from July to mid August and is a season of ruthless rainfall. Tulunadu sustains through a fierce monsoon every year, which can sometimes be a difficult time to survive through because of the obvious livelihood challenges that heavy rains bring along. The guardian spirits of Tulunadu (daiva) who are the protectors of the land are believed to go into hibernation or to visit places higher than the coast during Aati. Their shrines are hence kept closed for one month during this time, and Aati Kalenja, the young lad clad in coconut sheath steps in to perform the protective duties for the month.

Aati Kalenja, like Mankaali of Deepavali festival, is a wandering force who visits all homes of Tulunadu during the month of Aati wearing a bright costume, laden with tender coconut leaves (siri), a headgear named kadirumudi, and holding an attractive umbrella made of dried coconut leaves. He is accompanied by a woman who holds a thembare, a percussion instrument which she plays as she sings the pad’dhana (popular form of Tulu folk song) for him to dance to. At every home he visits, she sings and he dances with light movements to the rhythm of the pad’dhana, twirling his umbrella and keeping his painted face rather expressionless. He’s not much of an entertainer, but he makes for a delightful sight nonetheless.

Aati Kalenja siphons whatever evil or illness resides within the homes that he visits. Aati season usually sees a rampage of illness because of the unyielding weather, and Aati Kalenja is welcomed with hope at every home. After he completes his ritual, the home owners give him rice, perhaps some vegetable, tamarind, turmeric and a piece of charcoal from the house. Some of them prefer giving him money during the recent times, but the tradition prescribes the above mentioned items of utility. These materials collected from all households sustained the lives of the Nalike community during ancient times. This community consisted of daily wage employees who found it difficult to find labour during peak monsoons, so this practice helped them out. During the recent times they don’t find it necessary to carry out this ritual because they’re better sustained than ancient times, but some families have kept the tradition alive just for the beauty and cultural value of it. Aati Kalenja still receives a warm welcome wherever he goes and the home owners too are happy to adhere by the traditional norms of giving him items of use.

Thirty days during the season of Aati, pre-teenage or teenage boys from the Nalike community get busy in this ritual. Every day, they let an elder from the household paint their face with a foundation of yellow paint and artistic features. They get clad in bright attire and freshly procured siri and are accompanied by an elderly female to all the homes in their village. The Nalike community stands at the centre of almost all native rituals of Tulunadu that connect to spirit worship. They are extremely well connected to nature and are aware of the acutest seasonal requirements of livelihood, skilled with tasks such as procuring siri and designing creative items out of it, and at performing all rituals pertaining to spirit worship which forms the very ethos of Tulunadu. With practices like Aati Kalenja, they are welcomed into all households with the belief that they are skilled in the supernatural art of withdrawing evil and illness. Tuluvas unhesitatingly embrace such beliefs and adhere by them. And hence, despite the irrelevance of utility value of the practice in the modern world, Aati Kalenja is relevant and welcomed.