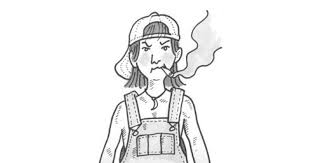 ‘The system isn’t right’ is a critical statement that’s perhaps as old as time itself. There has always been a system, a set of people it administered and a set of people it offended. No society has ever functioned without a system and no society has ever satisfied its entire population. Perhaps one system has seemed better than another but none of them whatsoever has functioned with zero flaws; and has always had victims and rebels alike. Only, the idea of rebelling against the established norm or said ‘social structures’ has obtained more popularity and social media credit points in the new world and has been unreasonably designated as a grand personality trait.

Opposing the system or an established structure of life has been necessary at many points in human evolution, and the process has led to revolutions that today form the foundation of ‘freedom’ as we see it. But like every good thing casts an inevitable shadow, the ‘rebellion’ culture penetrates into necessary systems like academics and hospitality and takes ugly forms. Certain systems are the basis of a functional society and cannot be compromised to the extent of accommodating every individual whim and fancy. Expecting that to happen and incessantly whining when it doesn’t, forms the popular ‘rebellious’ culture that’s way too overrated in the woke world.

The new generational rebellious culture finds gratification in the act of rebelling alone. It offers no substitute, no solution, nor any reasonable way out of the maze. The end point is the act of rebellion alone. Do not get me wrong though, there are a handful who have managed to make drastic changes that matter. But most of us have gotten into the routine of whining and complaining in the name of rebellion because apparently ‘the system doesn’t deliver’.

How often it is that we come across examples where people have achieved incredible things despite the system being unhelpful or even a hurdle in their path. Achievers hardly ever bother to be credited as rebels, for their true aim lies much higher. The social media culture of rebellion where rebellion really is either undue or unreasonable is in fact a safe space for mediocre minds to shoot to fame without much skill or work. And a staggering number of youngsters fall easy prey to this dirty trend, students in particular. Unless there is an intent and the means to bring about real, necessary change that can positively impact people; the rebellion trend is a dangerous trap to fall into.

One thought on “The alluring ‘rebellion’ trend”