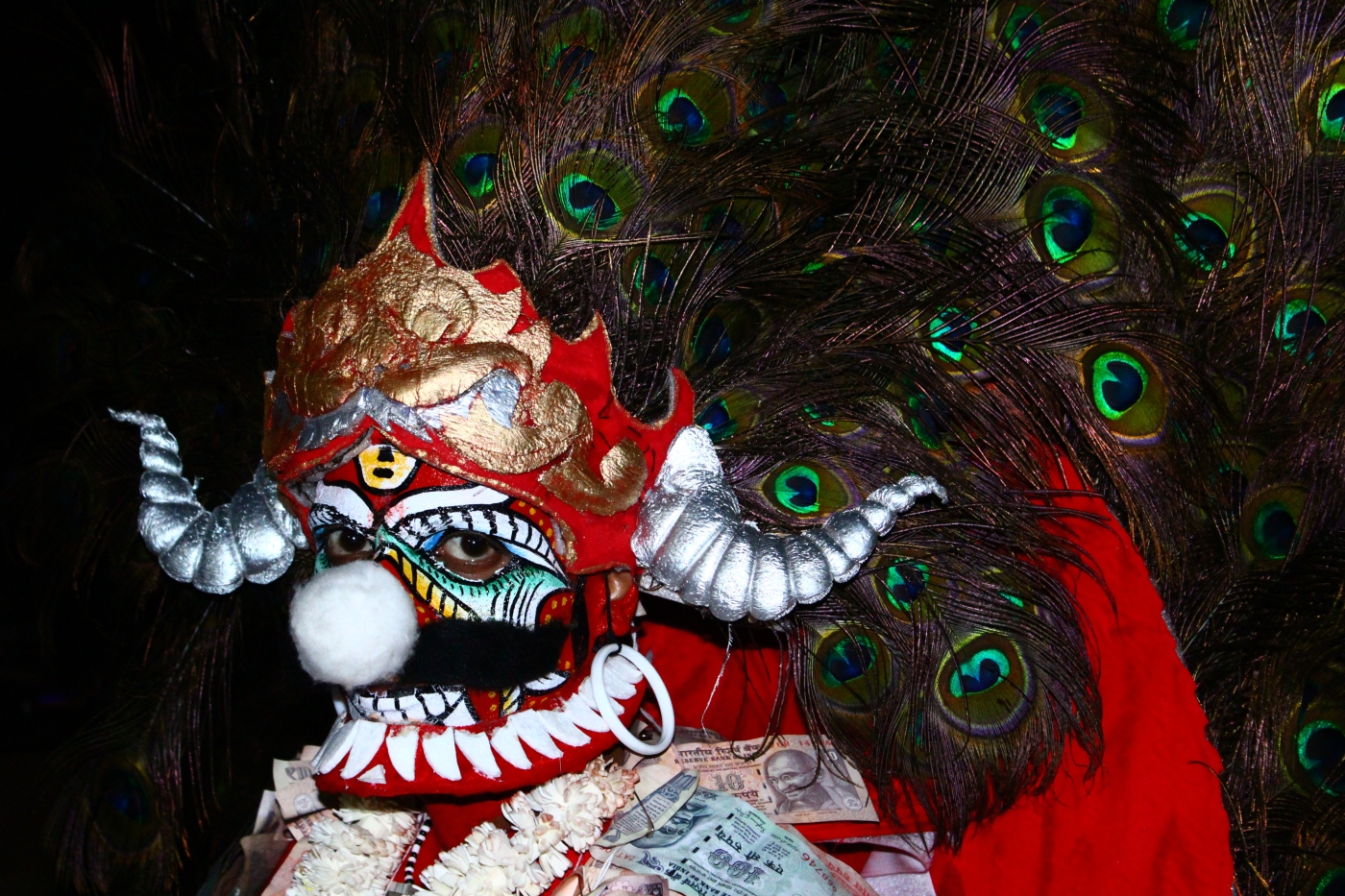 This article of mine was published in Deccan Herald Spectrum, in occasion of Holi.

If asked to pick the best factor about traditions and cultures of India, it would feel like picking droplets from an ocean, but I’d say that it is the fact that we celebrate even the smallest matters of importance with unimagined amount of splendour. Every little thing that was once a story or an instance is today a tradition sustained through generations, awing youngsters and adults alike. The notion becomes an agreeable one when you witness and understand the tradition of ‘Bedara Vesha’ or tribal dance that is dominant in Shirsi, Uttar Kannada.

As Holi, the festival of colours comes closer, a handful of skilled artisans in Shirsi get busy preparing for a unique form of cultural display that happens every year for four days just before Holi. This cultural display is called the Bedara Vesha, which constitutes an entourage of artists performing and managing a tribal dance, attracting the entire town to stand and gaze at with dumfounding enchantment.

The view of Bedara Vesha consists of a central figure, a man, who embodies a fierce tribesman clad in extravagant tribal costume cast in red. His face is painted to make a scary impression using oil paint and a cotton ball placed on his nose that gives an illusion of a hideously angry creature. He is clad from the back with a large mantle made of nearly 500 peacock feathers, which is the best feature of the cultural display because the feathers sway according to his movements, making his physical form a highly attractive and massive one. In his right hand he holds a sword which is also painted in red to assume he is just back from a hunt, and in his left hand he holds a metal shield. Other elements of the costume include wooden shoes, a bell-like ornament worn on the waist that produces loud tinkling sounds as the performer moves, large anklets and a head gear consisting bird feathers and these days even miniature lights and confetti. He dances vigorously to the rhythm of the 6 men who play an instrument named ‘Tamte’, producing fast, sharp beats that make for a delightful dancing ambiance. The energy of the performance is no short of a storm!

The person performing the tribal dance is supported by nearly 15 men who constitute the group. They begin practicing nearly two weeks before Holi. While 6 of them are musicians playing Tamte, 6 others form a procession like outlook by carrying ‘Hilal’ which resembles a torch with fire aflame. They also perform the task of keeping the crowd away from the performer, for his huge attire and dynamic performance requires as much space as the wildly curious crowd can manage to provide. The fire and music add a glorious aesthetic appeal, and the icing on the cake is the fact that Bedara Vesha is performed during the night. The performers roam around the village throughout the night, attracting people and putting up a mesmerising display that shall leave them craving for more. Also, there are two or three men who physically support the performer by holding up his peacock feather shield from behind – for one man cannot bear the entire weight of the costume properties. The supporters exert just as much energy into the performance as the tribal character himself – they have to precisely match his steps and movements for as long as he remains in action.

The tradition of Bedara Vesha is based on a simple legend that once, a tribal hunter set out for a hunt that went disappointingly unfavourable for him. At the end of the day when he was about to return home beaten and empty handed, an old woman appeared before him, mocking his beat state and taunting him for his inabilities; generalizing the same for his entire tribe. Enraged by the tantrums, it is said that the hunter chased the old lady down and slit her throat, and danced around the forest claiming his invincibility and strength. As a representation of that enraged energy of the tribe that makes them one of the strongest communities, the Bedara Vesha tradition was incepted and sustained for centuries now. Even today, a young boy dressed as an old woman first acts like he is jesting and taunting the hunter, inciting him to chase him. After a couple of minutes of his tantrums, the performer is ‘enraged’ by his actions and begins his furious, captivating performance.

This tradition is not a form of worship, but the performers do carry out a few rituals before they set out. The main performer ties lemons to his arms underneath his costumes, which is believed to keep him free of evil thoughts. However, unlike other similar customs we see in Karnataka, Bedara Vesha does not hold religious importance.

Regardless, this custom is amongst the ones most awaited in Uttar Kannada. One of the performers of the folklore, Ashok Joglekar, who has been performing Bedara Vesha for nearly 3 decades now, says that there are indeed many changes in the form now. A number of youngsters have shown interest in learning and performing them, making it more popular now than it ever was. The form is no more even restricted to the tribal community. Everyone loves to perform and witness it, and that has made Bedara Vesha an identity of Shirsi!

Now that Holi is almost here, the time is perfect for enthusiasts to make way to Shirsi to witness this phenomenon. Every street shall be honoured by the display of Bedara Vesha from 17th to 20th of April. We can ensure that the experience shall make its way to the most treasured memories of a folklore enthusiast, because despite the absence of a religious orientation, the tradition has sustained and grown stronger over the years!